I am a believer in the power of women.  A huge part of who I am today has to do with how my mother raised me. Mothers have a significant influence in their children’s lives . During my formative years, my mother was there guiding me and  coaching me . The love and care mothers share with their children lays the foundation for their children’s character in the future.

Mothers or women in general, are now more, should I say versatile.  They are no longer simply homemakers, but are involved in various industries.  Teachers, scientists, doctors, lawyers, you name it, women are there. No longer just a man’s world I tell you.

Empowering young girls to excel is what I bring to Camp Ohana Village.  Showing them opportunities they never knew existed and helping them reach their full potential is at the heart of our Girls mentoring program.

10 years ago when I began Camp Ohana Foundation, I empathize with the young girls women in the village especially after hearing their stories. Their level of self-confidence and self-esteem was very low.

This is the very reason why I developed the Girls Mentoring Program at Camp Ohana village .  We are all equal in this world. What a man can do, a woman can do and vice versa. By bringing in women leaders from various parts of the world to Camp Ohana village, the young girls can see that, yes it is possible for a woman to excel in any field.

An empowered woman empowers a child.  Simple math, – what we instill in the minds of women they pass it on to their children.  Hence, we are working towards creating future global leaders.

“To all the little girls who are watching, never doubt that you are valuable and powerful and deserving of every chance and opportunity in the world to pursue and achieve your own dreams.” —Hillary Clinton

Mentoring Girls to be Global Leaders 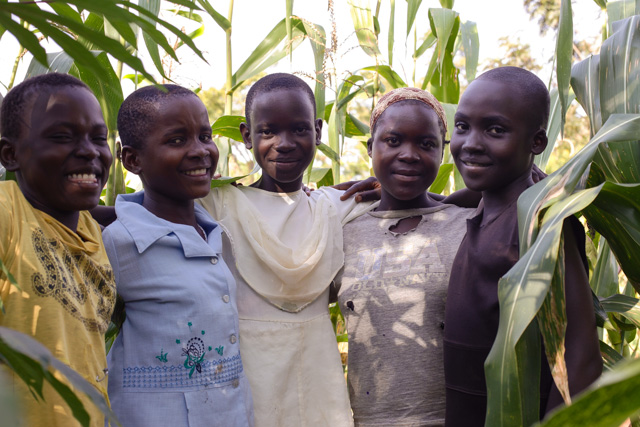 It has been said since time immemorial that when we support the empowerment and growth of girls, we raise the quality of life for everyone. Women lead in their community, they lead in businesses, they fight for their children, and above all they give voice to issues that are important to our collective future, like healthcare and education.

There are quite a number of organizations that have realized the important role girls and women play in the society and they go in at the ground level supporting girls and young women in under-served communities through the practice of mentoring. We are such an organization.

We have realized that many girls in such underserved communities play the role of bread winners in their families. They are therefore not likely to attend school, learn valuable skills and find rewarding careers.

The risk factors faced by girls include:

Our Girl’s mentoring program show them that they can achieve much in life; that they can become great business women, scientists, artists, lawyers, doctors and athletes. The program is structured such that it brings young people together with caring and accountable role models who offer support, guidance and encouragement aimed at developing their character, competence and self-esteem.

Our mentoring program helps the girls to deal with frustrations, accept criticism, handle disappointments, and behave with compassion and humility. Most importantly, we want the girls to know that they have a future. That’s why we are appealing to people who are passionate to make contributions to ours girls’ mentoring program.

Soccer for Kids - Unlock the Potential in Your Young Athlete

Some parents, especially those who have never been athletes, may think that sitting on the sidelines in lawn chairs, eating snacks, gossiping and cheering their seven year old on now and then, fulfills their duty where soccer is concerned. Any coach can tell you that’s just not so.

The soccer coaches and volunteers at Camp Ohana can teach children the rules, the plays, and the strategies of the game, they can coach kids to a win, or through a loss; but young athletes need so much more to reach their full potential. As a parent, you have the ability to ensure your child's success.

Help your young soccer player to:
Love the sport - A child won’t excel if they don’t love what they’re doing. But, don’t expect love at first sight. If your child is playing soccer for the first time there are all sorts of reasons she may not like it. Maybe, she’s shy, the coach is scary, she doesn’t know the rules, and/or the other kids are strangers. But, if by the middle of the second season she still doesn’t enjoy playing, it might be time to look for a new sport.

Keep Things in Perspective - Soccer for kids should be fun. If any sport plays too big of a role in your child’s life, it affects his ability to be a well-rounded, interesting individual. When a sport becomes “all” important, the pressure to excel can damage a child’s self-esteem as well as his performance. Soccer should be just one of many interests in a child’s active, fun-filled life.

Control Emotions - People feel emotions 200 milliseconds after an event happens, and think consciously 500 milliseconds later. That accounts for an awful lot of emotion on the soccer field. At least 14 kids are experiencing thousands of emotions and making decisions based on those emotions; while running at full speed up and down the playing field. Once a game is over, encourage your child to talk about what he felt while playing. Take advantage of this one on one time to teach your child to set anger, frustration, and disappointment aside, until after the game, when you can help him understand why he feels the way he does.

Deal With Ups and Downs - Losing is a natural and expected part of sports, and your child needs to know and understand that he’ll win some and lose some. Focusing on losses hurts a child’s ability to stay positive and motivated. Sometimes there is a cause for a slump, and changes are in order, but at other times it’s best of put the loss behind you and just focus on doing your best.

Sidestep Negativity - A negative teammate can sap the energy from the entire team. No one should be teased or subjected to negative comments and pessimistic views. That goes double for a young child who is trying to give their all in a soccer match. Children don’t possess the social skills needed to counteract a negative teammate in a productive manner. And, since negativity is a learned response to stressful situations, the negative teammate is most likely unaware that he is doing anything wrong. Watch how teammates engage with each other on and off the field, and report any negativity to the coach. You’ll be doing the whole team a favor by addressing negativity before it has a caustic effect.

To make a donation or express your support, please contact us

Camp Ohana enables the poorest underprivileged children in western Kenya to discover their potential to later share with the world while they are currently being supported by a global ‘ohana’, meaning family. Those children are anxious to participate in many different programs and learn how important it is to be part of a team in youth group activities that will be a stepping stone to leading a successful life in the future as a good citizen of a community.

Why is recreation important? Play is an essential part of growing physically, mentally and emotionally and is a builder of self-confidence. Play is also the way children learn new skills and discover their interests and special often hidden talents.

A sport, such as soccer, offers kids the opportunity to learn how to play and work well with others. Cooperation is necessary for it isn’t possible to win games without helpful teammates just as it isn’t possible to succeed in life without other people. The skills taught in playing sports are ones that children will need through their lives.

The important lesson of perseverance is also taught by sports. One has to keep trying and not give up even when things are difficult, just as will come up in situations in later years.

Camp Ohana provides those children in villages in Kenya with equipment and programs for athletics as well as music and art along with coaches and teachers to guide them in the proper use of what they are given. The prime goal is to develop their future potential for themselves and as leaders for their community and the world.

For more information on the important programs of Camp Ohana Foundation and how your donation of as little as $5.00 per month can fund the project of your choice, please visit our  contact us in Green CV Springs, Florida, by telephone at 515- 864-7002 or by email at info@campohana.org.

The statistics on Kenyan girls from poor families are sobering and alarming. Because few attend school, they can't imagine a future of anything but poverty. Unfortunately, others in the community reinforce the message that Kenyan girls can’t learn valuable skills or eventually have a rewarding career. At the Camp Ohana Foundation, we intend to change that by supporting our girls mentoring program. With training and encouragement from adult role models, we believe that these girls can grow to become self-sufficient and make a powerful difference in their communities.

When a girl joins our mentoring program, we carefully match her with an adult woman who shares her interests and is successful in her own career. Our mentors spend quality one-on-one time getting to know the girl. This is the best way for the mentor to understand the dreams of her new young friend. Mentors model leadership and, most importantly, reprogram the girl's internal message that she can't succeed. We believe that all young Kenyan girls are capable of great things when they are supported and nurtured.

Girls in our mentoring program also have the opportunity to hear guest speakers and complete weekly curriculum on career training. We don't expect girls at this young age to know exactly the type of work they want to do in the future. Instead, we provide reading material that allows them to explore numerous types of careers on their own. Of course, we are there to encourage them if they do discover something they want to pursue.

It Doesn't Take Much to Help Our Girls Mentoring Program

Our foundation understands how easy it is to feel discouraged about problems like this and feel there is nothing you can do. We have made it easy for you to support girls in need with our $5 monthly micro donation program. Please contact us to learn more about this or other sponsorship options.